Celebrations on the occasion of the DPR State Flag Day have started on the main Donetsk square – Lenin Square, a correspondent states.

The Heads of Ministries and departments, parliamentarians as well as the representatives of cities and districts’ administrations have taken part in the event.

Alexander Zakharchenko, DPR Head’s participation in the event is expected as well. About ten thousand people have gathered on the Lenin Square. A lot of people have brought DPR flags with them.

According to organizers, a composition made from balloons of DPR symbolics colors has been launched in the sky in the frames of celebration.

It should be noted that traffic is has been limited due to the events in Donetsk downtown. Tens of employees of the DPR Ministry of Internal Affairs kept order. Besides, representatives of the Emergencies Ministry and ambulance crews have been on duty.

It should be noted that the residents of the Donetsk People’s Republic (DPR) are celebrating the DPR State Flag Day for the fourth time.

For the first time, the celebration also took place on the capital Lenin square on October 19, 2014. 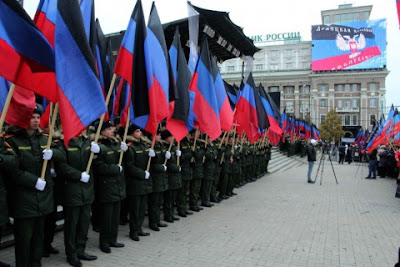 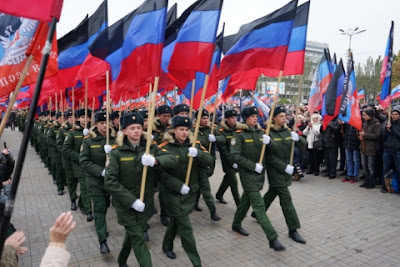 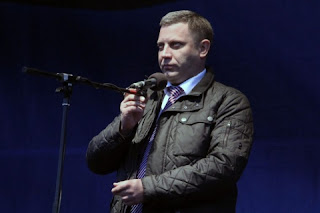 The flag of the Donetsk People's Republic has become a symbol of the Donbass inhabitants' aspiration for freedom and independence, the DPR Head Alexander Zakharchenko stated in his congratulations on the National Flag Day of the Republic on October 25.

"Fellow countrymen! I congratulate you on the Day of the National Flag of the Donetsk People's Republic. This holiday is important and significant to all of us. The flag is a most important state symbol. A symbol of our desire for freedom and independence," the congratulatory statement by the Head of State says.

Zakharchenko added that the Donetsk tricolor had already been waved in different countries of the world and on different continents.

"Our athletes win international competitions under the flag of the Donetsk People's Republic. The DPR flag flies over all our victories," the Head of State stressed.

"Under our flag we go into battle, raise our economy, open factories, build schools, houses, and kindergartens. I am sure the day will come when our flag flutters over all cities of the former Donetsk region!" Zakharchenko said in his congratulatory speech.

The inhabitants of the Donetsk People's Republic celebrated the Day of the National Flag for the fourth time in the history of the Republic. For the first time the holiday was held in the Lenin Square in Moscow on October 19, 2014.