Young republic is growing. The first triplet babies were born in the Donetsk People’s Republic. Parents gave name to the children in honour of the DPR-Dana, Nadezhda and Roman. The head of the republic visited personally the babies.

Alexandr Zaharchenko is sure that new-born republicans will be powerful backbone for the young state. The republic, in its turn will provide all necessary aid to the family Shevchenko.

For instance, now they have been given all children goods and the question of accommodation was solved.

Workers of the maternity home are sure that the birth rate is growing. And the case with the Shevchenko family is a positive example. 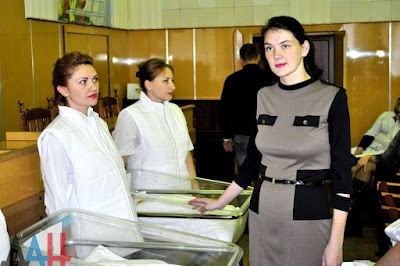 Dana, Nadezha, and Roman Shevchenko were born on December 23d in ‪#‎Donetsk. 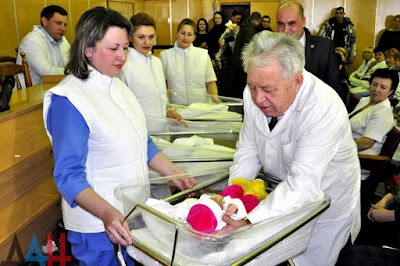 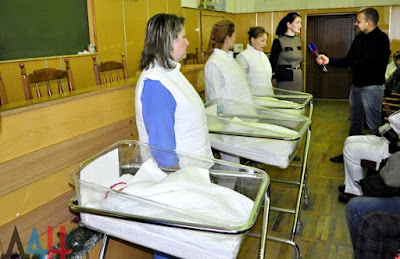 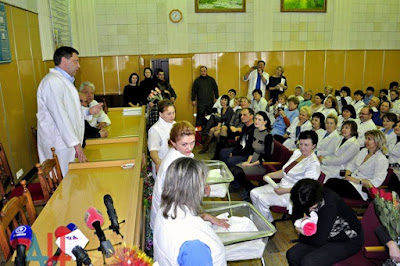 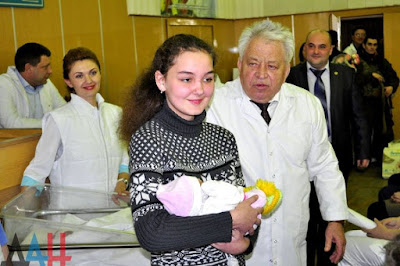 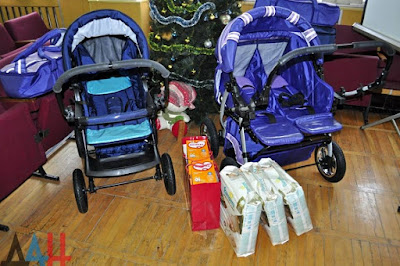 The authorities of the DPR will provide new housing to the family from Donetsk in which the first Republic's triplets were born. It was claimed today by the Head of the DPR Alexander Zakharchenko during the discharge of the mother and three babies from the Donetsk Maternal & Child Health Centre.

‘You won't believe, these children will be named assonant with our young state of the DPR — Dana, Nadezhda and Roman (according to the Russian spelling – Donetskaya Narodnaya Respublika – DNR). Therefore, I will honestly tell that it is a gift for the country. Besides, this spring there will be finished construction of 20 new houses. Keys to one of the apartments are already yours,’ addressed the young parents the Head of State.

He also noted that the authorities of the republic will provide ‘any necessary help’ to this family. Parents received gifts from the Head of the DPR — pampers and baby carriages for the newborns.

Triplets Dana, Nadezhda and Roman Shevchenko were born on December 23, 2015.

6182 babies were born in the Republic for 8 months

Press-service of the Justice Ministry reports that 6 thousand 182 babies were registered in the Donetsk People’s Republic for the last 8 months.

Statistic dates allows to make conclusion that birth rate is growing each month in the DPR. The first certificate of birth was given to young parents in Makeevka on 29th July 2015 by the Justice Ministry Elena Radomskaya. The certificate had all symbols of the DPR. Such certificates were given to parents of about 886 babies.


I will post information about Russian Nationalist, Igor Bezler, nicknamed the Demon from Wikipedia and other links.

Igor Bezler (Russian: Игорь Николаевич Безлер; born 1965, Simferopol, Crimean Oblast, Ukrainian SSR) is one of the pro-Russian leaders whose group controlled the local police department in Horlivka. He thus participates in the 2014 pro-Russian conflict in Ukraine and is said to have also participated in the 2014 Crimean crisis.

Bezler's father, Nikolai Bezler, was ethnic German (original spelling of his surname in German - Besler), his mother was ethnic Ukrainian, but he considers himself Russian. It is also known that many of his relatives, Russian Germans of Crimea were oppressed in Soviet period and moved from Crimea to Kazakhstan.

In 1994-97 Bezler studied at the Dzerzhinsky Military Academy.

The Security Service of Ukraine claims that until 2002 he served in detachments of the Russian General Staff GRU retiring as a Lieutenant Colonel. In 2002 Bezler moved to Ukraine.

According to Ukrainian officials, in February 2014 he was contacted by agents of the Russian General Staff GRU. Complying with their instructions, Bezler supposedly moved to Crimea where he participated in number of violent events connected with taking over of military installations and government facilities. In April 2014, as a member of a diversion group, Bezler helped take over the SBU (Sluzhba Bezpeky Ukrayiny) headquarters in Donetsk Oblast and the MVS district department in Horlivka.

On April 14, 2014, a YouTube video showed a man claiming to be a lieutenant colonel of the Russian army addressing police officers at the pro-Russian-held Horlivka police station and naming a new police chief.

The man was subsequently identified as Bezler. Ukraine accused him and Igor Strelkov of orchestrating the killing of Horlivka deputy Volodymyr Ivanovych Rybak. Bezler denies his involvement.

On July 17, 2014, a phone call was made at 4:40 p.m. Kyiv time, 20 minutes after the crash of Malaysia Airlines Boeing 777-200 MH17, by Bezler who reports to a person identified by Ukraine’s SBU as Vasili Geranin, a colonel in the main intelligence department of the general headquarters of the armed forces of the Russian Federation, regarding the shooting down of a plane. Bezler has said that the talk had really taken place but that he had talked about a Ukrainian attack aircraft shot down by the militia a day before the Malaysian airliner crash.

Shaun Walker, a reporter for The Guardian, claims that Bezler "is regarded as something of a loose cannon, even by other rebels, who speak about him in hushed tones." When Walker interviewed Bezler with the hope of asking him about the MH17 crash, Bezler reportedly bragged that he summarily executes some of the combatants he captures: "Those who are fighting with the Ukrainian army, we keep as prisoners. Those who are fighting with volunteer battalions, we question them and then shoot them on the spot. Why should we show any pity to them?... You should see what they have done to my people. They chop off their heads and shit in the helmets! They are fascists! So why should we stand on ceremony with them? Questioning, an execution, that’s it. I will hang those fuckers from lampposts!".

According to Walker, when Bezler saw the journalists recording this conversation, he ordered, "Burn their notebooks! Seize their electronics! Search everything for compromising material and then destroy it! If you find anything, execute them as spies!... Don’t think for one minute I will hesitate to have you shot."

In November Bezler has disappeared from public sight in Donbass and speculations about his death was circulated by some Ukrainian media (including a version that he was assassinated by Russian special services). LNR representatives admitted "he left Donbass" but rejected the claims about his death as fake. A video appeared on YouTube by end of November in which Bezler appeared, explaining he's alive and stayin in Poltava Oblast (Ukraine).

On December 19, 2014, Bezler was placed on the Specially Designated Nationals List by the U.S Office of Foreign Assets Control (OFAC). This placement prohibits U.S. persons from undertaking any business with him without first obtaining a license from OFAC.

Is this video of separatists executing two Ukrainian army officers staged?
By Team Observers on 06/06/2014 - 14:02

The authenticity of a video that alleges to show the execution of two Ukrainian officers in the restive east of the country is under heavy scrutiny. In the footage, a masked man shoots two men hooded and facing the wall after a separatist leader – identified as Igor Bezler – addresses the camera and gives the order to fire.

The video – which was posted online on Wednesday, June 4 – lasts one minute and 45 seconds. It was reportedly taken in Horlivka, in eastern Ukraine, where pro-Russian separatists are currently in control. The man addressing the camera threatens to shoot more prisoners unless his own men are released by the authorities in Kiev (scroll down for a full transcription of the video in English).

The Junta captured my man three days ago. We were negotiating with them about exchanging this person for the Ukrainian army, SBU [Ukraine Security Service] and police officers [that we hold]. Three days, the Ukrainian junta refused to exchange the person it captured for the Ukrainian officers. I hold in captivity three colonels, one of them an SBU colonel, and three lieutenant-colonels. At the moments all agreements with the Ukrainian government have been broken. I waited for three days but I don't have time to wait any longer. So now we will shoot Mr. Budik and Mr. Vasyuschchenko. For Mr. Turchinov [Ukraine’s interim president], Parubiy [Secretary of the National Security and Defence Council of Ukraine] and others of their ilk - if my man is not released within one hour, I'll shoot another two. After another one and a half hour - another two. And so on, until 8 [Ukrainians] are shot. If the Ukrainian army and the state don't need these officers, I need them even less. Load! Aim! Fire!

At 1:25 in the video, the two prisoners – tied and facing the wall – fall to the floor after shots ring out. According to a weapons expert contacted by FRANCE 24, the ‘executioner’ appears to be holding what is likely to be an AK 74 weapon – an arm common in both the Ukrainian and Russian military, and among separatists. A magazine can also be seen attached to one of the weapons, and the sound of it being loaded can be heard before it is fired.

None of this proves that the executions are real, however. As our expert – among others - points out, the lack of a bright muzzle flash has lead many to suggest that the incident may have been staged [though it’s possible the camera wasn’t sensitive enough to pick up bright muzzle flashes]. Perhaps unusually, the faces of the two prisoners are never revealed: the cameraman keeps his distance, making it impossible to determine their true identity nor the extent of any injuries.

Internet users have also suggested that the manner in which the two men fall to the ground could prove that the execution was faked. According to Ann Kiernan - a ballistics expert contacted by FRANCE 24 - the noise indicates that the weapon was fired in automatic ‘burst’ mode, which is far less accurate than single fire mode. This means it’s unlikely the shooter would have hit his targets so precisely. Yet the two prisoners fall straight away, as if neatly shot in the head. She adds that both man fall far too quickly –almost at the same time as the burst of fire – and, unusually, lie still after the shooting.

What’s likely, however, is that the man featured in the video is separatist leader Igor Bezler. This shadowy figure – who the Ukrainian government claims worked in the past for the Russian military - has already featured heavily in news reports and articles on the unrest tearing eastern Ukraine apart. He reportedly goes by his nom de guerre ‘bes’ – or ‘devil’ in English. He has also been linked to an attack that killed 16 Ukrainian soldiers in May.

The video below - posted in April - appears to show Bezler addressing separatists. Though he lacks a moustache, here Bezler bears a close physical resemblance to the man shown in the purported execution video. Other photos posted online reveal an even closer match between the two.

In response to the video, acting Ukrainian President Oleksander Turchinov released a statement on Thursday. He accused Bezler of being a Russian-born “criminal” and vowed to capture and punish him. He added that Ukraine would never negotiate with “terrorists and murderers.” But Kiev has neither confirmed nor denied whether or not the two men named in the video are indeed dead.

The video could be footage of an earlier incident reported by Ukrainian media, in which Bezler carried out a staged execution of two officers in the basement of his headquarters on May 27. The two, named as Roman Babyuk and Dmitry Krikunov, were reportedly later released. Yet the names of the two men allegedly executed in the video – Budik and Vasyuschenko – do not correspond to those mentioned in earlier reports.

The question of the video’s authenticity is far from being settled. But real or not, the fact that gunmen have resorted to filming an apparent execution marks a turning point. Scenes that were familiar to the world from wars in Iraq and now in Syria are threatening to become part of a conflict raging on the fringes of Europe. The footage could succeed in terrifying a civilian population already caught up in the vortex of bloody infighting.

This article was written by FRANCE 24 journalist Andrew Hilliar (@andyhilliar).