We wish the Head of the Donetsk People’s Republic, Alexander Zakharchenko a Happy 40th birthday. 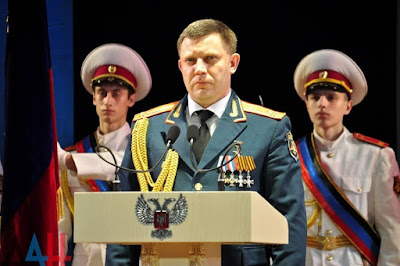 DONi Congratulations on Anniversary of Alexander Zakharchenko, the Head of DPR

Today is the day when was born the person whose name will be forever connected with free Donbass and the Donetsk People's Republic.

Today the father, the commander of the legendary unit “Oplot” ("Stronghold") and the Head of the Donetsk People's Republic Alexander Vladimirovich Zakharchenko turned exactly 40.

More than two more years ago almost nobody knew him outside his native Donetsk. When his country turned out to be in hands of mad junta, the father of four children, the miner and the businessman refused to run away at the moment, difficult for the native land and took arms in his hands. Since then very few people imagine him without military uniform.

He isn't afraid to face death.

He is hated by aggressors in Kiev and criticized at home, but even the most sworn enemies recognize that being oneself, he became a symbol of the Republic, the symbol of fight for the right to live under the people’s own laws.

On the shoulders of this person there is also laid the burden of responsibility not only for the Russians of Donbass, but of the whole Novorossia as well. Perhaps, he will soon bring the people not only of Novorossia, but also of Ukraine into the Euroasian Economic Union.

On behalf of the whole staff of the Donetsk International News Agency DONi we heartily and sincerely congratulate Alexander Vladimirovich on his Anniversary, we wish him good health, domestic harmony and progress in both personal and state affairs.

We are glad to another opportunity to welcome and express the feelings of respect to the vigorous Head and the wise statesman. Many Years, Alexander Vladimirovich, we heartily wish you inexhaustible energy and invariable success in your activity for the sake of the great future of the Donetsk People's Republic. Good health, happiness and wellbeing to you, your family, and the peaceful sky over your head!

PRESS CONFERENCE OF THE HEAD OF DPR AND LPR (2 FEBRUARY 2015)
http://unitedarmedforcesofnovorossiya2014.blogspot.com.au/2015/12/press-conference-of-head-of-dpr-and-lpr.html

Alexander Zakharchenko about ideology: "Why do we fight?"
http://unitedarmedforcesofnovorossiya2014.blogspot.com.au/2016/05/alexander-zakharchenko-about-ideology.html

Pogrebinsky: DPR readiness to attack Poroshenko’s military mission as a reminder of Minsk Agreements (24 May 2016)
http://unitedarmedforcesofnovorossiya2014.blogspot.com.au/2016/05/pogrebinsky-dpr-readiness-to-attack.html

ALEXANDER ZAKHARCHENKO: DONETSK HAS UP TO 40,000 SKILLED MILITARY IN RESERVE
http://unitedarmedforcesofnovorossiya2014.blogspot.com.au/2016/06/alexander-zakharchenko-donetsk-has-up.html

ZAKHARCHENKO VISITED THE FRONTLINE (28 MAY TO 2 JUNE 2016)
http://unitedarmedforcesofnovorossiya2014.blogspot.com.au/2016/06/zakharchenko-visited-frontline-28-may.html